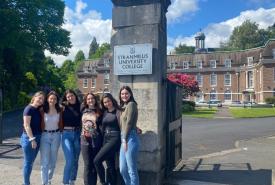 Have you ever seen the rain coming down on a sunny day? Well, you definitely will if you visit Belfast! It is the capital city of Northern Ireland, and the second largest city on the island of Ireland. Belfast is not only known for its crazy weather, but as well for being the birthplace of the Titanic and former home of C. S. Lewis, who created a masterpiece called the Chronicles of Narnia. Sadly, Belfast was also the main venue of the Northern Ireland conflict, locally better known as the Troubles. This is the city I chose for my Erasmus semester 2022, and it taught me a lot about friendship, conflict and peace – and to never forget my umbrella when leaving the house.

Arriving in Belfast was a culture shock at first. I did not know much about Northern Ireland, the conflict and the people there. Of course, I had read a bit about its history, but I was far from understanding how the Troubles are still affecting life and the appearance of the city. Therefore, I was quite shocked to hear in our lessons about Northern Ireland and Peacebuilding, how divided the country still is between Catholics and Protestants, Irish and British. Shocked to experience that even most schools are separated in those two parties. Shocked to see murals of soldiers, machine guns and people celebrated as martyrs, stating paroles like ‘you are not going to take our British (or Irish) identity away from us’ or ‘prepared for peace, ready for war’. The city’s and country’s history is still very present and noticeable, in people’s minds and hearts as well as on the walls of the city.

But of course, I was also making joyful experiences. I was lucky enough to share a flat with eight wonderful girls from Spain, Switzerland and Norway. Together, we explored Belfast, went on trips through Northern Ireland, down south to the Republic of Ireland, and Scotland. We spent almost every wake minute together, building strong friendship bonds that will hopefully last for life. Moreover, I was able to do a placement in one of Belfast’s primary schools and get insights in the Northern Irish teaching practise. And I learned a lot about life skills: How it is to live in a different country, to be without my family for this long, to follow classes in English and to experience, that wherever you go, there are friends you don’t know yet, who are just waiting to meet you.