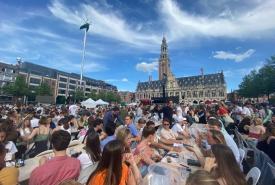 The idea of going on an exchange has been growing in my mind for some years, and as my best friend decided to go on Erasmus, I was all in to join her. In the end we could not go to the same place, and I went alone to Leuven in Belgium… and it was the best thing that could have happened to me!

So, here I was – alone in a new city. I had been travelling the whole day (by train – be green ?), nevertheless I went to the first event of the “Welcome Week” I was going to have. Insignia, an international student’s organization, worked out a lot of exciting activities and as Leuven is a lively students city, I already got to know a lot of people (and with some of them I would spend a great semester). So, this first week of orientation and getting to know the city and the people would influence my whole stay in Belgium.

First, I got to know a lot of people from different nationalities (not only European, but African, Asian and North American). Every time it was fascinating to sit on ONE table with people from Spain, Ukraine, Nigeria and Norway at once, I got to know so many traditions and mindsets and I will cherish this open exchange of thoughts forever. And, as I went alone, I got to be really open to every opportunity to get to know new people and was really lucky to find some amazing close friends I will hopefully keep in my life for a long time. (Some flights to meet up are already booked!)

Also, the university opened some eyes for me in different ways. I had the opportunity to have an internship in a Flemish school and got an insight into the whole Belgian school system (and even held a lesson myself). The classes in university varied a lot; there were whole classes for personal growth and experiencing ourselves identity and heritage; there were classes about Europe, Geopolitics and climate; and classes dedicated to supporting children with the help of art, music and drama. It was a semester balanced of facts and work. I learned a lot!

And I got to know many, many places in Belgium and especially Leuven with all its corners. Travelling in Belgium is not very expensive, and Brussels is literally around the corner (or a 15 min train ride). But Leuven has a lot to offer, too! It is a very green and modern city; everybody goes by bike and no cars are allowed in the inner-city circle. A variety of UNESCO projects get tried out with the help of the city office, creating a lot of green spaces in the city.

Leuven is not just a student’s city for Flemish students, but internationals alike. And as an old student’s city, Leuven has some nice traditions (most of them revolving around beer, of course). And I was lucky enough to be in Leuven during the big cantus. (A cantus gets celebrated every year, it is a student’s festivity where people sing students songs in Latin, Dutch and sometimes even German. There are some rules to “ad fundum” beer when you break them.)

In conclusion, my exchange to Belgium is an experience I would not want to miss in my life.